Galangal  grows in countries such as China, New-Guinea, India, Indonesia and Japan. The plant was introduced 1000 years ago in Europe by Arabic physicists and is a variety of the Zingiberaceae family.

Galangal (Alpinia Galanga) is a plant that grows in countries such as China, New-Guinea, India, Indonesia and Japan. In general Galangal is used as a spice in the kitchen and resembles the tasted of ginger. The rooth of this plant  can also be distilled into a liquor and it’s being used in many herbal remedies. The plant grows from rhizomes in clumps of stiff stalks up to 2 meter in height with abundant long leaves that bear red fruit.

The plant was introduced 1000 years ago in Europe by Arabic physicists.

This plant’s rhizome is the “galangal” used most often in the kitchen, valued for its use in food and traditional medicine. The rhizome has a pungent smell and strong taste reminiscent of black pepper and pine needles. Red and white cultivars are often used differently, with red cultivars being primarily medicinal, and white cultivars primarily as a spice. The red fruit is used in traditional Chinese medicine and has a flavor similar to Cardamon. It’s a variety of the Zingiberaceae family.

Chewing on a piece of Galangal can help relieve symptoms of a toothache. It can also be mind enriching and it has a mild psychoactive effect, depending on the dosage it can be hallucinogenic.

Dosis: 1 to 10 grams at a time, from making tea with added honey or use in it different kind of dishes such as a curry or simply just a piece of rooth to chew on.

Do not use during pregnancy or while lactating. Not suitable for baby’s or young children.

There are no reviews yet.

Be the first to review “Galangal” Cancel reply 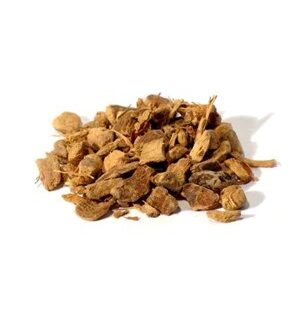